November 10th – 14th, 2013 – I had the pleasure of participating in “Africa: A Perspective” – the first World Economic Forum Young Global Leader (YGL) Education Module focused on Africa. Sponsored by the Aliko Dangote Fellowship, it took place at the Royal Bafokeng Nation, in the capital of Phokeng. The Nation is near Rustenburg in the North West Province of South Africa.

I almost didn’t make it there because when I arrived at Heathrow Airport for my transfer, they wouldn’t let me go further. Immigration stopped me since I didn’t have a completely blank visa page in my passport which is something the South African government requires. Remember this if you travel a lot and are headed to South Africa! I’m a seasoned traveller but that had never happened to me before. I had to spend the night in London and then finally made it to Johannesburg the next day. I had missed my group so they sent a car for me to take the two and a half hour ride to Phokeng.

We stayed at the Royal Marang Hotel which was absolutely beautiful. It was the right blend of modern luxury and an earthy African style. The rooms were quite plush and the restaurants were top-notch. The setting was very relaxing. I taught yoga one morning by the pool for some of my fellow YGLs.

On the grounds was the Bafokeng Sports Campus–a world-class, high-altitude, sports training destination. The 65-hectare campus even has its own medical center. Sports are clearly important for the Royal Bafokeng Nation. It boasts the 42,000 seat Royal Bafokeng Nation Stadium which hosted six of the 2010 World FIFA Cup matches including the much anticipated opening USA-UK match which was played in front of a packed stadium and ended in an intense 1-1 draw.

The Nation is led by King Leruo Molotlegi–the 36th King of the Bafokeng and the 15th direct descendent of a long lineage of the Bafokeng kings. He spent time with us at the beginning of the program and then had breakfast with a small group of us on our last day. In his mid-40s, the King is very progressive and is seeking to build a sustainable future for his community of 150,000 people living in 29 villages. We also had the chance to meet his mother, Queen Mother as she is affectionately called.

The Royal Bafokengs are in a unique financial position. The Nation is an example of direct community participation in mining ventures and has an asset value of USD 4 billion. They own 1200 square kilometers of land under which lies part of the world’s largest platinum reserve, the Merensky Reef. They also own 13.16% of Impala Platinum and have a seat on its board. In addition, they are majority shareholders and managers of their own platinum mining and refining company, Royal Bafokeng Platinum, which employs over 3,000 people. Half of their financial investment portfolio is now diversified outside the mining sector and includes financial services, telecoms, property and transportation.

So much about the Nation is unique for a rural African community. All of their resources are held in a Trust on behalf of the Nation as a whole and their investments are managed through a wholly owned investment company, Royal Bafokeng Holdings. This means that no individual has decision-making power in how their collective resources are used, as they follow all the institutional, legal and auditing requirements for trusts and corporate management. The Nation has a hybrid governing system, falling under both the South African constitution and indigenous law. This allows for deep community participation and wide accountability in how they administer their plans and funds. We held one of our sessions under the tree where their leaders meet.

The results are impressive. The Royal Bafokeng Administration, which implements their social development programs, employs around 400 people and has spent over USD 400 million on roads, utilities, schools, clinics and other public amenities in the last decade. 96% of all households on Bafokeng land have electricity and 99% have clean piped drinking water in their houses or yards. Education is part of a broader plan to make the Nation’s society and economy more self sustainable. This was clear in our visit to the Lebone II College which was the most inspiring part of our trip. It is the flagship school for the Nation – a creation of the King as an example of excellence. The facilities are state-of-the-art and the management is strong. The students receive a holistic education focused on self-development, high achievement, parental involvement and traditional values. They are instructed in English with mother-tongue instruction in the early grades. They have classes such as the “Theory of Learning,” as well as strong science, math and arts programs. Empowerment messages are on the walls throughout the campus. We each received a “Truth bracelet”. The students wear them as a reminder to be true to their values.

The majority of the children come from the Nation, with 30% from other groups. The hope is that the students will receive an excellent education as a foundation, go out into the world to gain additional experience, and eventually come back to the Nation to lead and grow the community. The King explained to us that part of their strategy is to provide incentive programs, such as sponsoring students for higher education abroad, to encourage them to come back. The students were quite smart and inspiring. My student host was Gomolemo. She is graduating this year and wants to study in the United States for college. She has her list of desired schools and is now determining how to pay for it. I also met another young lady who wants to be a dance teacher. All of the students were extremely articulate and seemed very well rounded. Schools in the U.S. would benefit from the Lebone II College approach.

The Nation is close to two world class destinations which we had a chance to visit. We had dinner at the famous Sun City – the internationally renowned resort, gambling and golf complex. We also spent an afternoon at the Pilanesberg Game Preserve in Pilanesberg National Park, which is adjacent to Sun City. The Park was built from a set of farms and a former Zulu sanctuary. In the 1970s, Operation Genesis reintroduced key species. Today, it is the third largest reserve in South Africa. The Park has in excess of 7,000 animals including 24 of the larger species, and it is in a malaria-free region. We were lucky to spot some lion relaxing, a few families of elephants, zebra roaming about and a handful or other animals. We had our closing dinner around a fire at the Reserve. Despite a little rain on and off, it was absolutely beautiful!

In addition to our field trips, we had lectures from notable professors and speakers on broader issues. For example, Moeletsi Mbeki, Executive Chairman of Endemol Productions and younger brother of former President Thabo Mbeki, talked to us about Africa’s mineral wealth and the development of the Africa Market – moving from just exporters of raw materials to exporting finished products. Gillian Marcelle, Associate Producer of Strategy and Innovation at WITS Business School, led a sessions on agriculture and innovation. We discussed the challenges and opportunities specific to African. Technology and entrepreneurship are two of the drivers that can help lift up the continent – particularly if more girls are mentored in these areas and spark The Girl Effect.

All in all, it was an incredible trip. The Royal Bafokeng Nation gives us an example of how Africa can develop from the community level, and the Lebone II College showcases the potential of all of our young people to succeed if given the right educational experiences. Much gratitude to fellow YGL Tumi Makgabo who spearheaded the program, and John Dutton and Virginie Bays from the World Economic Forum in Geneva. It was a relatively small group of us – around 30 people – which made it more intimate then some of our bigger Forum/YGL gatherings. As an African-American born in Ghana, this was certainly one of the most personally memorable events.

On our way back, I spent time in Johannesburg with a few YGL friends. We relaxed at the Radisson Blue Gautrain Hotel where a lot of business people convene and had lunch at in Nelson Mandela Square. The Square is right next to the luxurious Michelangelo Hotel, in which I had the pleasure of staying some years ago with my mom. The jovial bronzed statute of Nelson Mandela towers almost twenty feet above the sidewalk cafés and exclusive boutiques. People of different nationalities co-mingle as they dine and shop under foot. This statute and Square represent a South Africa that Mandela helped create and is sign of progress toward his vision:

“I have cherished the ideal of a democratic and free society in which all persons live together in harmony and with equal opportunities.”

Although there is still a lot of work to do, South Africa continues to move closer to that “Rainbow Nation” as Archbishop Desmond Tutu called it. 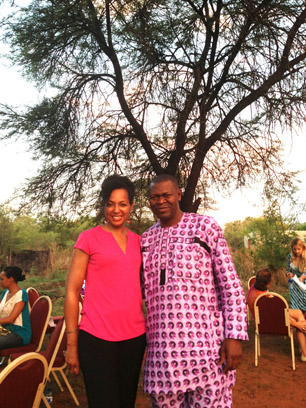 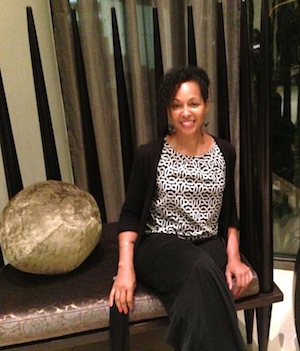 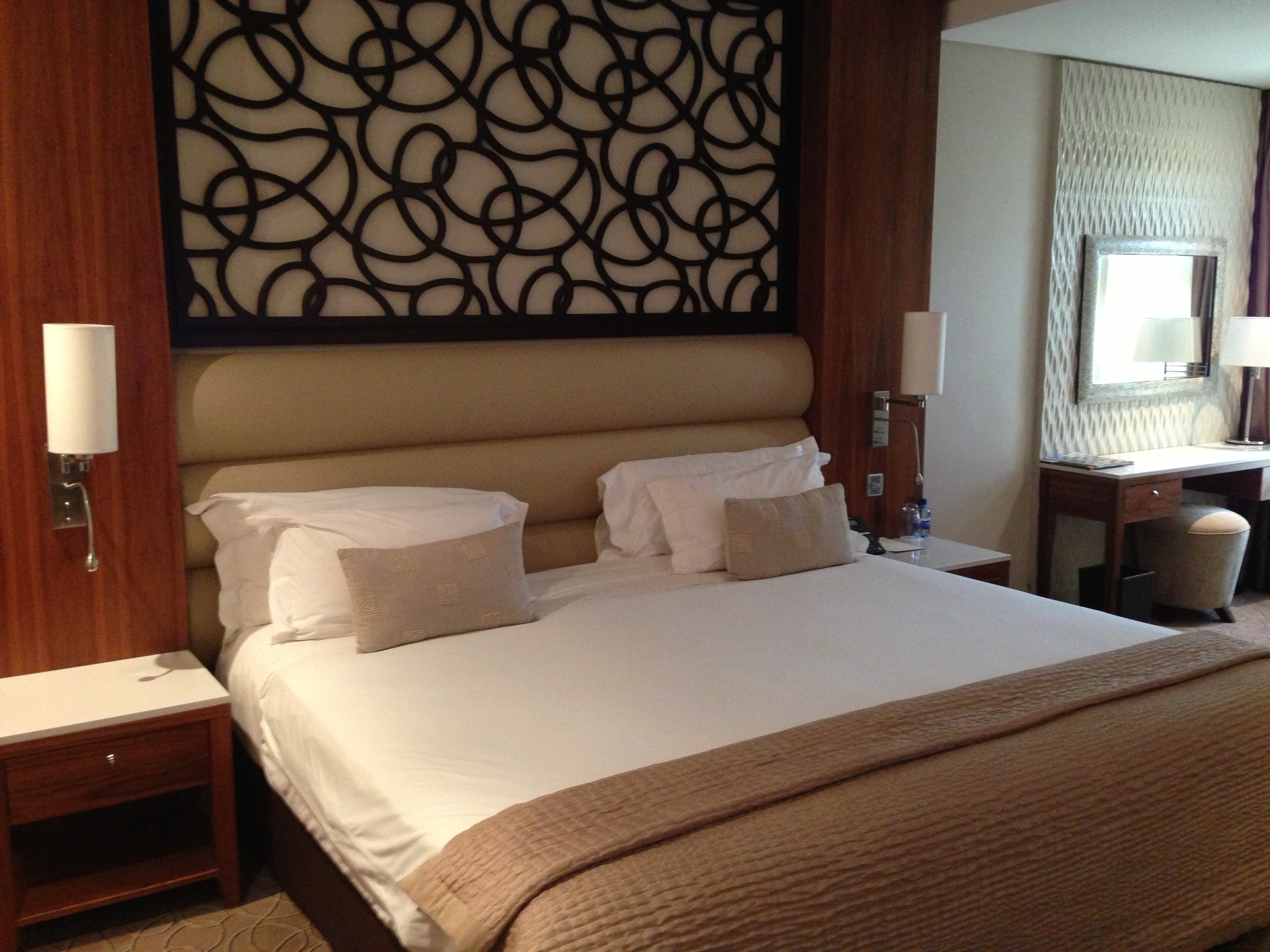 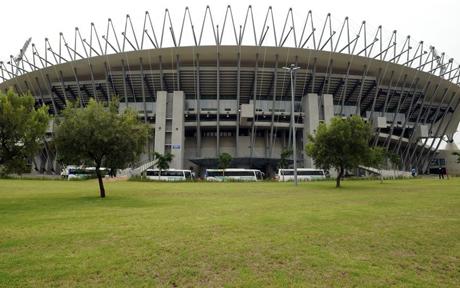 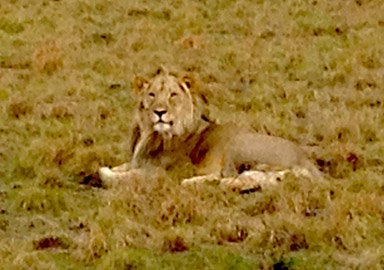 Lion at the Pilanesburg Game Reserve in South Africa – November 2013 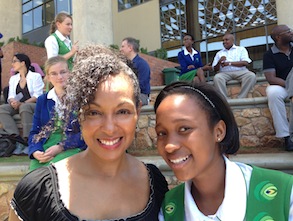 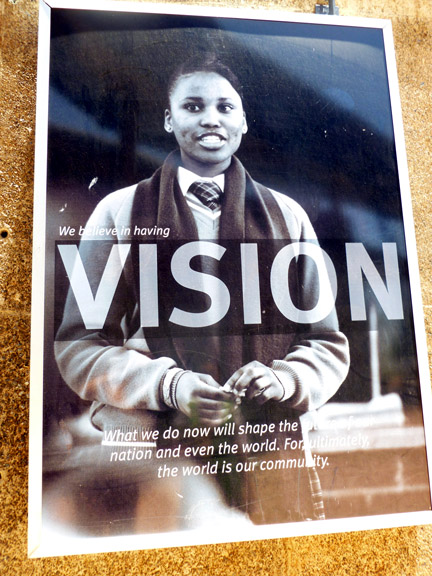 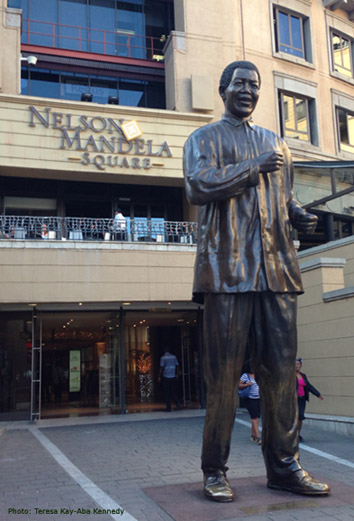