February 17-20, 2016–I joined 97-year-old yoga master Tao Porchon-Lynch for the 13-hour flight from New York to assist her in offering three programs for the inaugural XYoga Dubai Festival.  We had a pre-activation event at Al Barari’s Heart & Soul Spa on February 17th. In a very rare occurrence for Dubai, it rained very hard midway through Tao’s outside yoga session so we moved everyone inside the Spa. I moderated an intimate discussion with Tao which ended up being extra special for the attendees. We are quite thankful for the hospitality of Javad and members of his team including Dovile Slavinskaite, Sara Fakhouri and Mina Karaiskou. We stayed at Manzil Downtown Dubai and had delectable meals throughout the trip.

In a sea of mats and upstretched arms, more than 9,000 people joined the opening yoga demonstration at Burj Park in Downtown Dubai for the biggest public yoga session in the Middle East. It showcased Bollywood star Shilpa Shetty and Indian yoga guru Suneel Singh. Tao offered a session on the big stage and I had the honor of demonstrating postures. As usual, everyone loved it and crowded around Tao for photo opportunities afterwards!

In the evening, we attended an outside reception to celebrate with the event organizers and other presenters like Shilpa Shetty, Suneel Singh, Sadie Nardini, Dashama Konah, Pierre Ravan and Sanne Kerkhof. They were all excited to meet Tao. The gathering was held at the Palace Lakeside Garden at The Palace Hotel. Next to Burj Khalifa Lake, this palatial hotel is simply gorgeous and makes you feel like you’ve stepped into an Arabian movie. With the water right next to us and the gondola-like boats passing by, there was a touch of Venice as well! We also were treated to a light show from Burj Khalifa which has the largest LED-illuminated facade.

Organized by Dubai Tourism and XDubai–an initiative focused on promoting an active lifestyle in Dubai–the festival featured yoga, meditation, live music, healthy food and even a children’s play area. In total, there were 53 sessions and demonstrations, 38 guest yogis and 20,000 attendees over the two main days of the event, February 19th and 20th.

XYoga Dubai Festival is a year-round multi-event celebration of yoga kicking off for the first time in 2016. With the growing popularity of outdoor activities in the emirate, XYoga Dubai is designed to highlight the accessibility of yoga as a lifestyle choice to help encourage people to defy their bodily limits and mental boundaries.

The last full day in Dubai started off with Tao receiving another massage at the Nad Al Sheba Sports Complex. Then, she taught a yoga session. Once again, I demonstrated the postures and then we shared our popular Conversation with a Master talk and slideshow. It was very well-received as it has been in other places around the world like Slovenia and Montenegro. As always, there was a line of people to meet Tao and take pictures with her. It’s unbelievable that she had the energy to then do media interviews!

In the afternoon, I had the opportunity to do a little shopping while Tao rested. I was on the hunt for a couple of gifts for Tao and myself to give. Sheeraz, who was driving, took me to Old Dubai for a few things and then we went to Souk Al Bahar (“market of the sailor”) closer to the Manzil Downtown Dubai hotel.

I now know the right places to get gorgeous shawls and delectable dates (food not people)! Below are some pictures. Click on each image to make it larger. 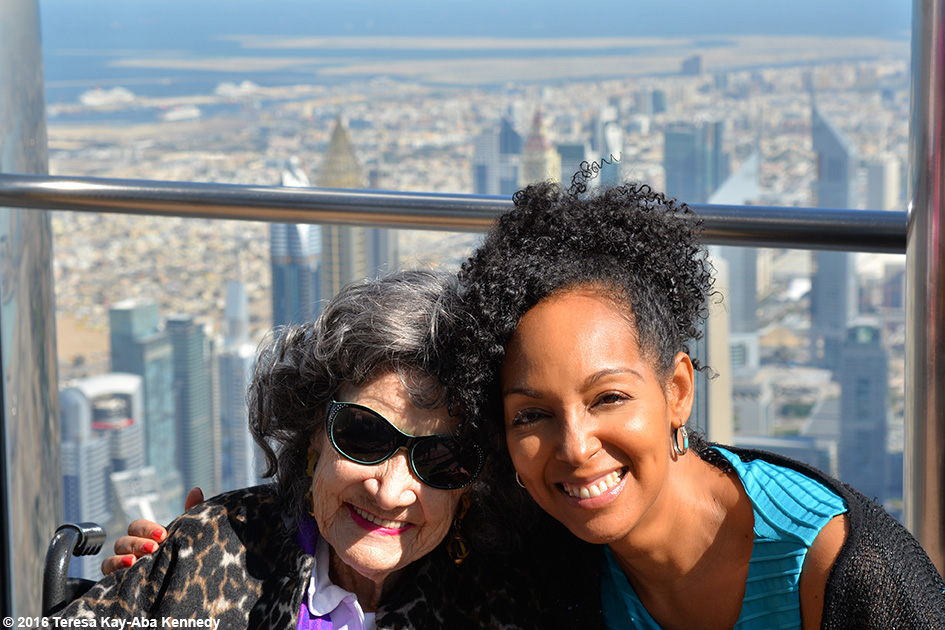 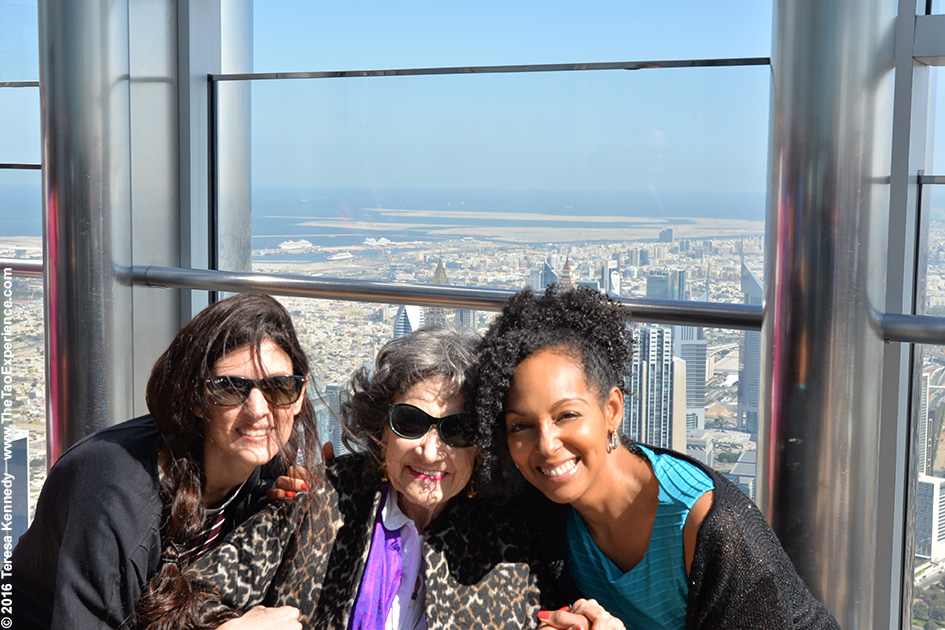 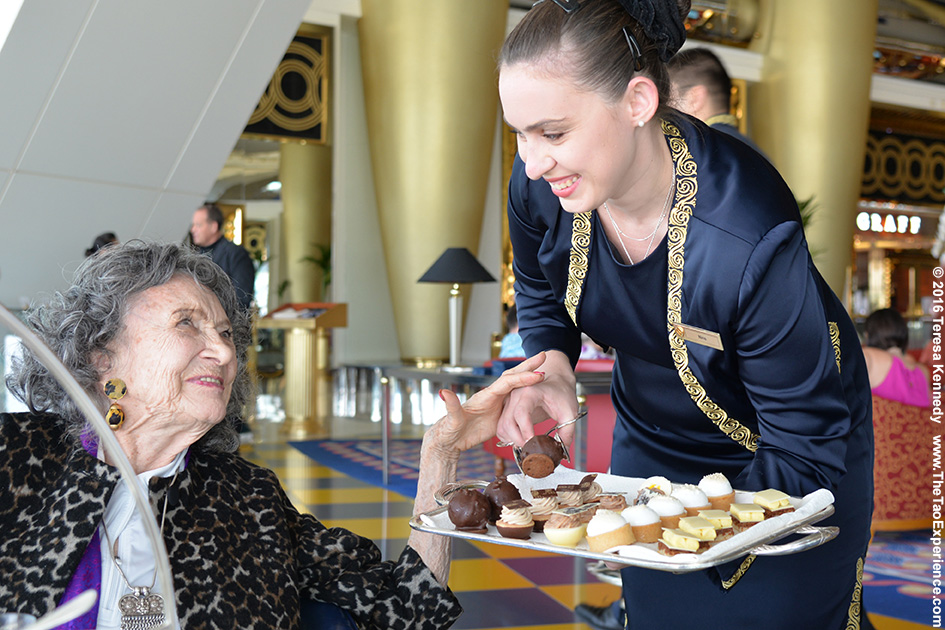 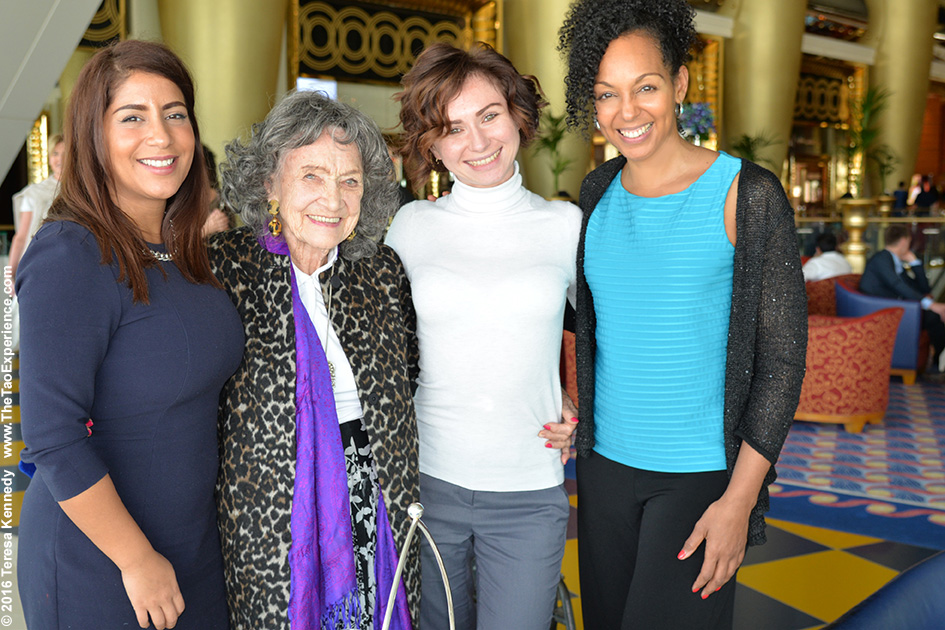 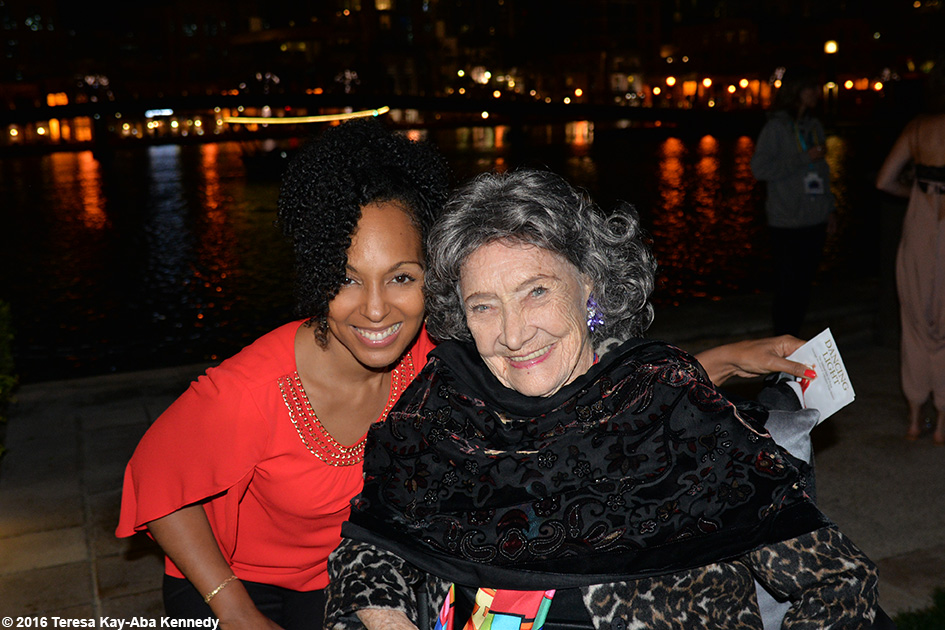 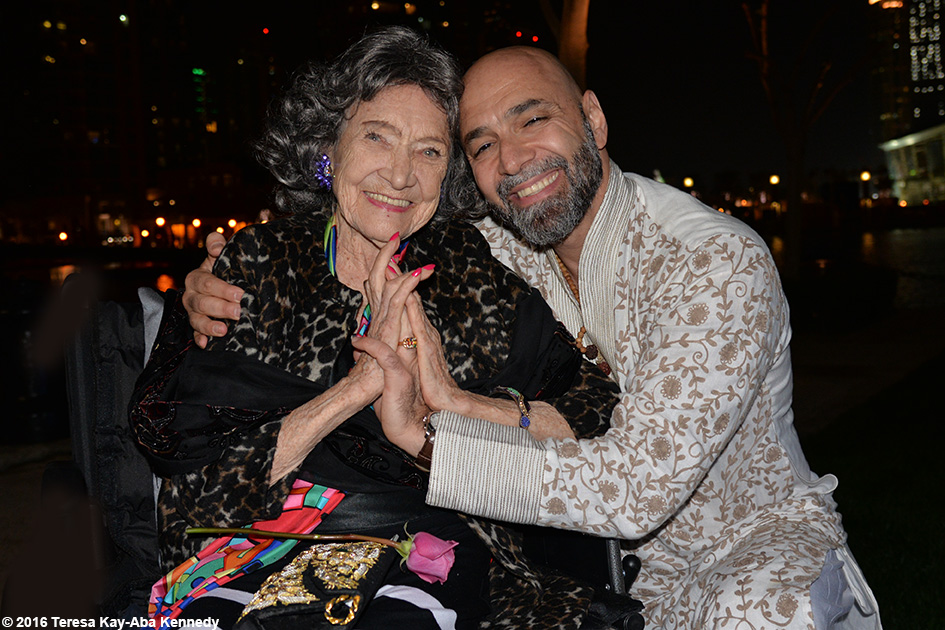 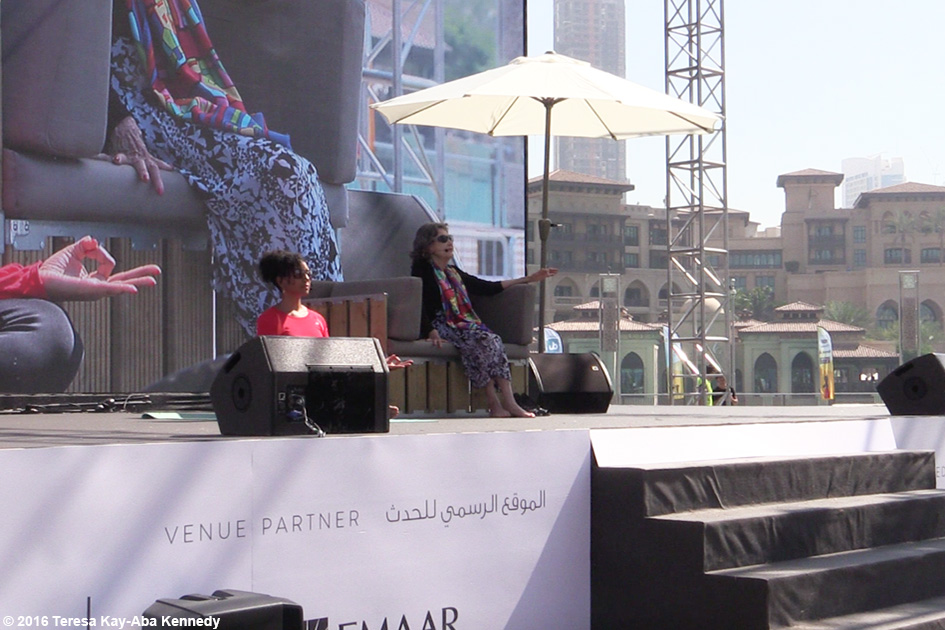 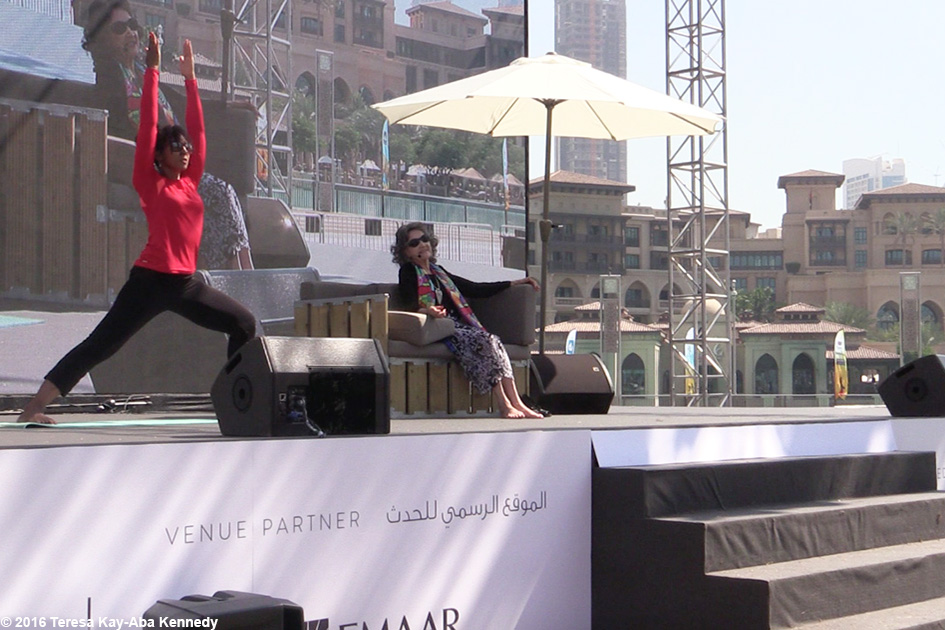 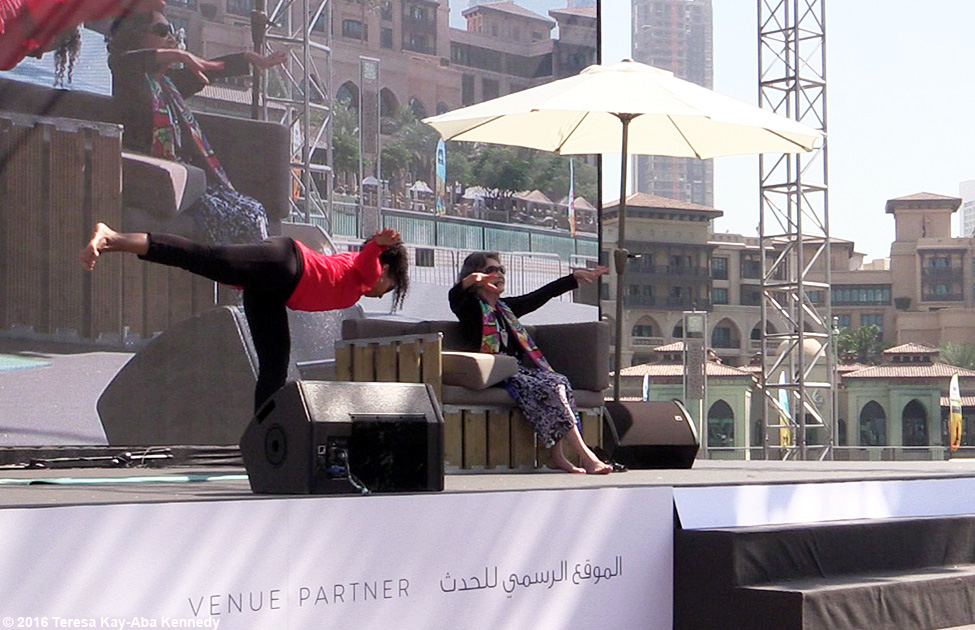 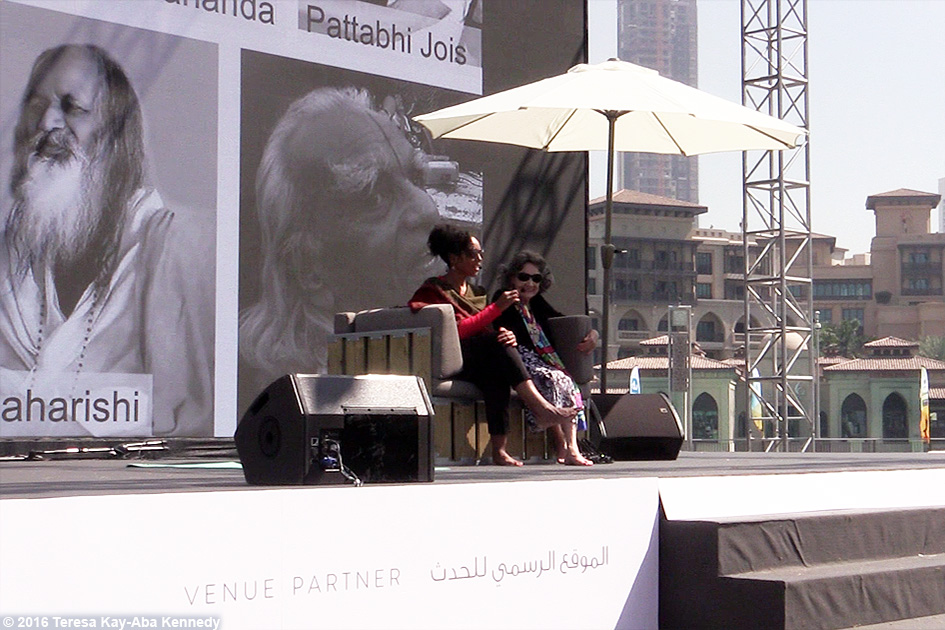 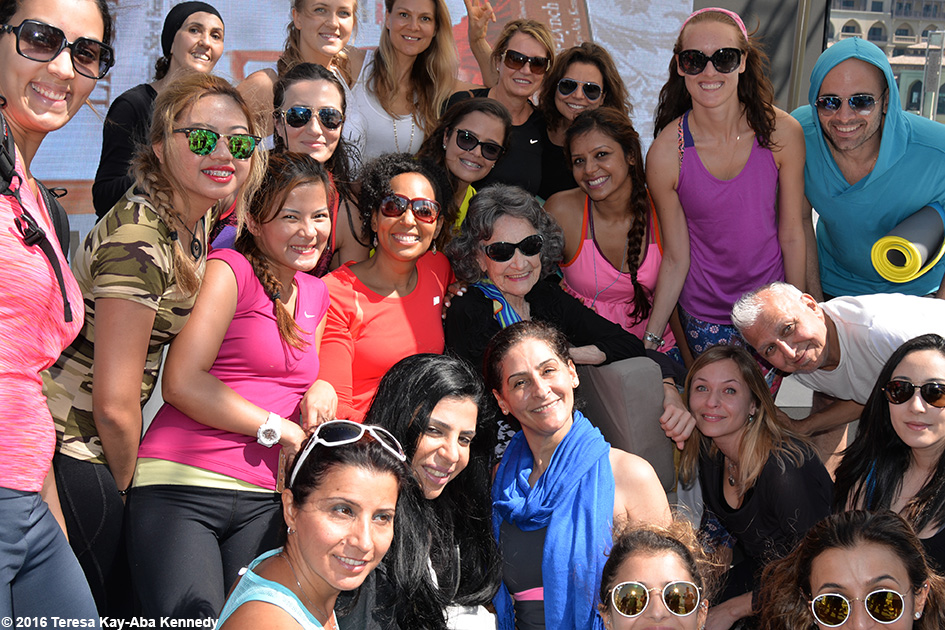 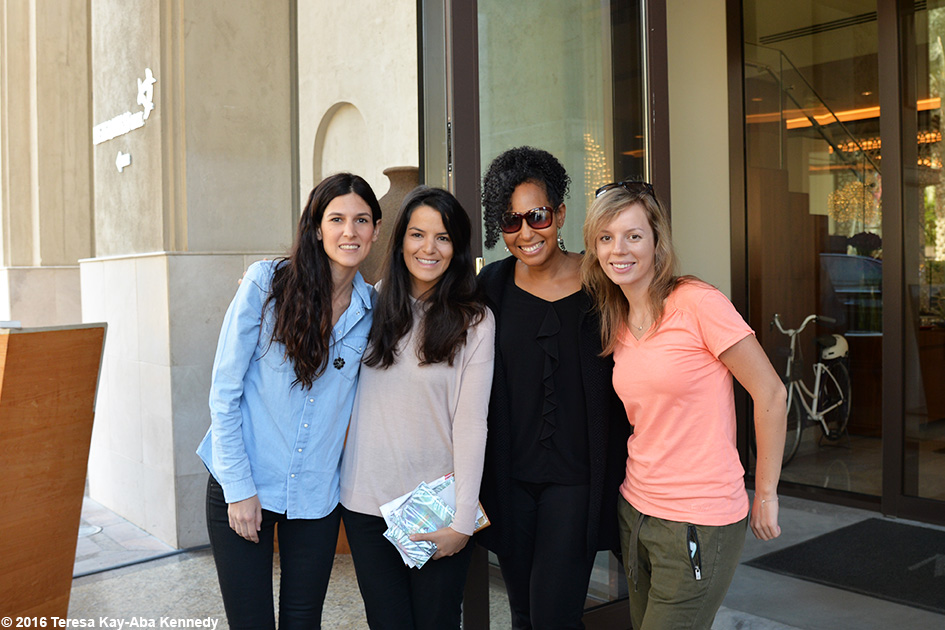